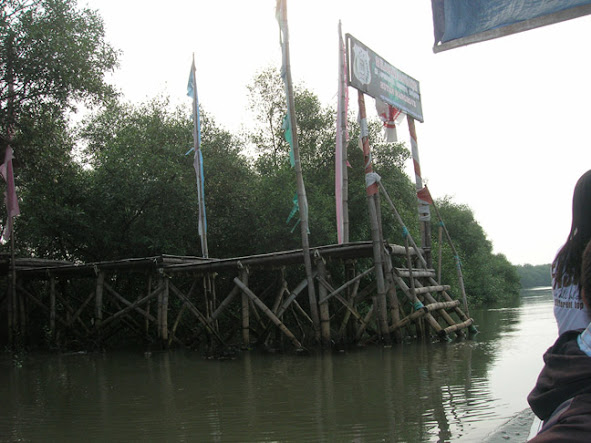 “Only few hours after escaping, that monkey’s carcass was hung on a tree branch. Its face was ruined, its limbs were tore apart, it was all messed up! That must be the act of native monkeys here,” told Firman Arifin, the manager of Wisata Anyar Mangrove (WAM), Gunung Anyar, Surabaya.

“As a human kingdom, the monkeys are also acquainted with territory, colonies, leaders, soldiers, and regulations. When an outsider monkey tries to enter the territory, it would be considered as an attack attempt. Mostly, the outsider is finished like that,” Firman added.

That is story about the 10 monkeys donated by the City Government for the Mangrove Forest Ecotourism in Gunung Anyar, one of Pantai Timur Surabaya or Eastern Coast of Surabaya (Pamurbaya) sectors. In Gunung Anyar, we canceled the monkeys’ release. However, one monkey was escaped and went directly to the mangrove forest by instinct. Then, as we know, it had to face a tragic fate.

There are already monkey kingdoms in the eastern part of Surabaya. A balanced natural ecosystem has been developed too. The vegetations and animals in Gunung Anyar are pretty much the same as in Wonorejo mangrove forest.

I think the differences are only the route and the management. So, the natural view, boats and gazebos might be different each other. Unlike mangrove tours in Wonorejo, WAM’s route does not pass through the estuary (so no need to worry about crocodile :P).

But still, after half an hour of sailing, the journey ends up on Surabaya’s beautiful sea. That means, the Gunung Anyar mangrove forest and the Wonorejo mangrove forest is actually connected. It is only 4 km, if I am not mistaken.

WAM alone is located at Gunung Anyar street, two kilometers to the east from Universitas Pembangunan Nasional (UPN), Eastern Surabaya. It is reachable by any vehicles.

Currently, WAM make use of fisherman’s boats. One can carry up to 15 persons, including the driver. Made of unique bamboo, the boat is stylish with the woven palm leaves. It is proven very fit and steady in the middle of the sea, ask the fisherman’s who use the same boats for years for a living.

The cost was just IDR 7,000 per person, for shared boat with other tourists. In other hand, you may rent it privately by IDR 80,000, including the driver and guide’s fee. We (Iksan, my friends from PAS FM, Yudha from Biology ITS, and I) chose the second. So we could go freely and rest to the gazebo.

WAM is a conservation of mangrove. It has developed by the local government of Surabaya. It is a Agency for Municipal Development (Bappeko) project, precisely. Then the community in Gunung Anyar took initiative to manage it as a tourism site.

The Ecotourism Gunung Anyar Mangrove was then inaugurated by the mayor of Surabaya, Bambang D.H., on January 1st, 2010. There were also chairman of the Surabaya Tourism Promotion Board Yusak Anshori, the head of Gunung Anyar Tambak District Kanti Budiarti, urban planning expert Johan Silas, and Firman Arifin as the head of neighborhood association there.

We turned the head quickly. What. Was. That?!

Oh, my, my! From the gazebo, we saw two golden fur monkeys ran out of the puddles in the middle of the mangrove forest. They are only three meters from us. Damn, it’s long-tail monkeys, the monkeys that Firman had talked about! Macaca fascicularis!

Unfortunately, we had only a coolpix, iPhone and BlackBerry camera. You cannot grab a fast-moving object with such gears. Moreover, when you are getting closer, the monkeys would run away and hide. Huff! 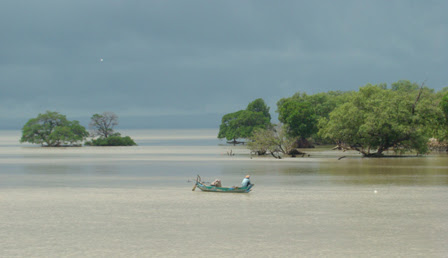 So we just sit in the gazebo. Took some pictures of the boat, mangrove rows, (perched, not flying) birds, or photographing each other, like the ordinary tourist did. That’s all. Yet, it was so beautiful.

I was thinking about floating meeting on the river. Or in the gazebo. With the view of mangrove forests in your right and left. Birds fly. Just be quiet, and you’ll hear the monkeys sing the lullaby for you.

Extraordinary, thanks for posting!

What a story, even just from the monkeys.

This site uses Akismet to reduce spam. Learn how your comment data is processed.